In 2010 a new company was established in Styria under the license of inlingua International to broaden the language courses on offer in Styria.

Mag. Wolfgang Schirmer, company founder and CEO, leads the company as the sole shareholder since April 2014.

Since the beginning of January 2011 the new location of inlingua Styria is opened in Graz. It has its own car park and good access to public transport (train, bus).

Are you interested in a language course? Please send us your enquiry. 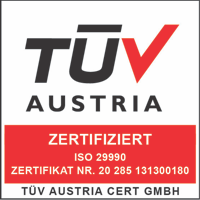